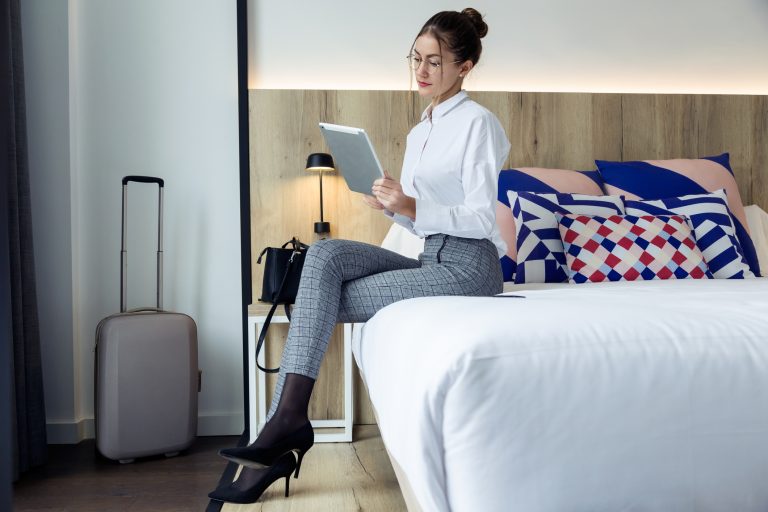 We live in a world where wires, cords and keys are quickly disappearing – and BLE is waiting to replace them.

But what is BLE, exactly?

At some point, that little Bluetooth icon on your smartphone, tablet or computer has probably caught your eye. Odds are, you’ve used it many, many times. When Bluetooth is active, your device sends and receives a specific band of radio waves to and from the device it’s paired with. In our case, from a door lock to a phone and vice versa.

This allows guests to unlock their doors with universal compatibility and user-friendly operation. With a BLE door lock, a guest simply needs to tap his or her phone onto the lock to securely open their door. It’s that simple.

But the real merit of BLE is right there in the last two letters.

BLE’s Low Energy standards stretch the amount of time a device can operate before its battery has to be replaced. A BLE lock idles in a “sleep” mode while it isn’t being used, then “wakes up” when a guest wants to unlock it with their phone. In between these interactions, the lock draws almost no power, meaning far fewer battery changes. It’s the critical component that keeps electronics manufacturers using BLE in everything from portable speakers to fitness trackers – and now, keyless guestroom entry.

But is it secure?

Security is a common, valid concern with any type of wireless technology. What’s stopping a digital attacker from duplicating a wireless key or swiping sensitive information?

At OpenKey, we utilize 128-bit encryption, one of today’s most widely used forms of security. This process takes data transferred over BLE and translates it into a jumbled combination of 128 zeroes and ones. That means that, if an attacker tried to decode our sequence, their odds of finding the right sequence would be 1 in 2×10128. That’s a two with 128 zeroes after it.

To put that into perspective, researchers at the University of Hawaii calculated the total number of grains of sand on Earth at 7.5×1018. Imagine trying to find a single grain among all the sand in the world, much less among an amount mind-bogglingly larger than that. Even if a supercomputer attempted an automated brute force attack, the amount of time needed to crack the code would surpass the age of our universe.

So you might say that 128-bit encryption is extremely secure. It’s the standard for mega-corporations around the globe – and widely considered unbreakable.

Where do I start?

When you’re ready, we’ll work with you to install BLE locks throughout your hotel. We’ve partnered with lock manufacturers like Dormakaba, SALTO, and ASSA ABLOY, so you’ll have the freedom to choose which one fits your lodging and your budget. We’ll pair your locks with secure OpenKey software, arrange installation, and you’ll be ready to introduce your guests to a new era of keyless entry.